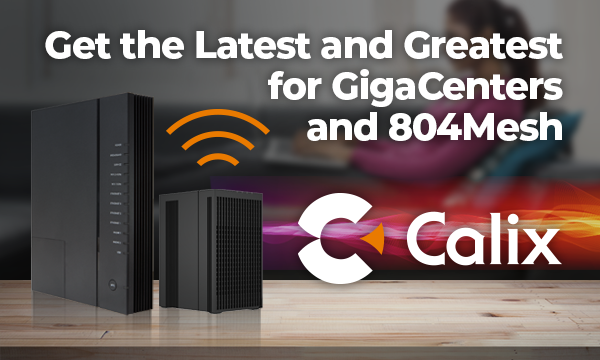 Visit the Calix Software Center to download new software for the GigaCenter and 804Mesh, which features a number of enhancements, including:

More details are provided in the respective Release Notes, which are available from the Calix Software Center.

Take steps to safeguard your subscribers' privacy and security

Most consumers do not know how to update the firmware on their GigaCenter. This could put their privacy, and the security of their data, at risk. One example is the infamous ‘KRACK’ issue, which was addressed in Release 1.1 of the 804Mesh software.

GigaCenters can be updated individually, using the embedded web interface (EWI) — as outlined on page 107 of the Calix 844E GigaCenter User Guide. Calix Consumer Connect Plus (CC+) and Calix Support Cloud customers, however, can perform a “bulk” firmware upgrade, which allows for updates to be made to multiple GigaCenters at the same time. The upgrade process requires typically takes less than five minutes. Calix recommends that firmware upgrades be performed at times where network activity is lightest; typically, between 2-5am., although this window will vary among subscribers.

For more information on the importance of firmware upgrades, check out my Beacon article from September 2018, “Why You Should Update Your GigaCenter Firmware”.

Children Aren't Safe Online, But BSPs Can Protect Them Against Cyberbullying

Go Green and Go Lean: How To Slash the Cost of Serving Subscribers 50% While Cutting Your Energy Consumption in Half

Want To Win? Build a Brand Your Subscribers Believe in and Transform Your Community

Creating Giants Will Recharge Your Career by Helping Communities Everywhere